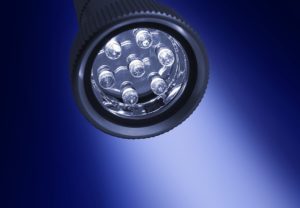 If you are one of the many Canton area business owners looking to take advantages of the rapidly dropping prices of commercial LED lighting systems, then it might help to gain a fuller understanding of some of the terms, concepts, and ideas related to energy-saving LED technology.

As a light source, LED bulbs are capable of releasing energy in the form of photons, just the same as any traditional light bulb. But the difference is in their reduced energy use, longer life span, and cooler operating temperatures.

While the higher cost of LED bulbs prevented the technology from becoming more widespread for the better part of a century, the rapidly advancing technology behind commercial LED lighting has made it more affordable then ever. In addition to steadily dropping product costs, the long-term energy savings associated with LED is why business across the world have begun to embrace them whole-heartedly.

One of the biggest advantaged of LED light bulbs is the fact that they can be manufactured with different color outputs, or even switch between color outputs at the click of a button.

Measured in degrees Kelvin (K), CCT goes from 1,000 to 10,000. My choosing your CCT based of the function of the workspace, it is possible to create more productive areas that are more conducive to the activity at hand.

The ability of an LED light bulb to show the natural or realistic colors of an object, such as a painting or office furnishings, is measured by the Color Rendering Index (CRI). The CRI runs on a scale of 0 to 100. Generally speaking, LED lightbulbs with a CRI of 90 or above are considered to be the best at object color rendering.

While CRI is more of an aesthetic measurement, some of the most style-conscious Canton companies have begun to pay attention to this number as a way to make their facilities more welcoming, memorable, or comfortable for clients and employees alike.

A lumen is a measurement of visible light. To put it simply, the higher the lumens, the brighter the LED light appears to be.

Watts, on the other hand, are a unit of electrical power and do not necessarily translate directly into brightness. Different LED lighting fixtures and overhead warehouse lights will require different wattages based on their construction an installation.

Taking full advantage of the benefits of industrial LED lighting is not possible without the integration of a dynamic LED control system. While this can be simple as a few motion sensors and a couple of dimmer switches, it can also be a computerized system that works to change lighting conditions over the course of the workday.

In addition, a growing number of studies indicate that adjustable working conditions are a big part of worker productivity and creativity.

LEDs Are Becoming the Standard in Canton

With a 90% reduction in energy use over incandescent lighting, it is no surprise that industrial LED lighting is becoming more and more common. Learning the terminology behind LED lighting is an essential first step in making this important upgrade to any office building, warehouse, or production facility.